Over 1490 households have been displaced by devastating earthquake of 12th of Baishak 2072 BS (25th of April, 2015), in Nala VDC of Kavre District. Immediately, there were the signs of miserable situation in different community of Nala VDC which are full of harmony and cultural richness. The families of 814 houses that were totally damaged are now living in the temporary shelters (Campsites). 4 human losses occurred in Nala VDC, and around 52 people were seriously injured.

Over 1490 households have been displaced by devastating earthquake of 12th of Baishak 2072 BS (25th of April, 2015), in Nala VDC of Kavre District. Immediately, there were the signs of miserable situation in different community of Nala VDC which are full of harmony and cultural richness. The families of 814 houses that were totally damaged are now living in the temporary shelters (Campsites). 4 human losses occurred in Nala VDC, and around 52 people were seriously injured. Around 116 livestock’s were killed and many more were injured as well. 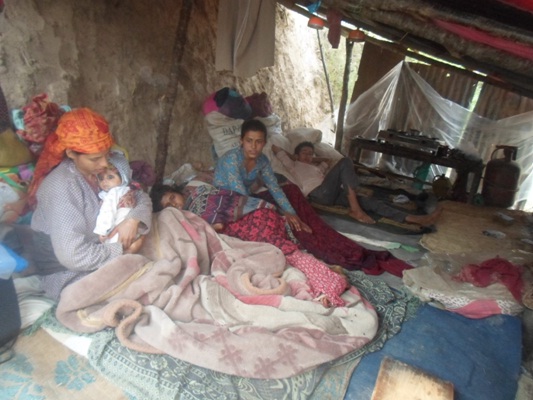 “It took 78 years of effort to make one building as home and it took merely 1 minute to destroy it” said Dhan Maya Shrestha from epatole- 3 of Nala. “I spent my whole life trying to fill this house with happiness and prosperity and now when I was satisfied that my job has been done, I have no place to take shelter.” Traumatized with the incident, she is forced to live under the shelter of her neighbor and eat packed noodles while storage of food is buried somewhere under the piles of woods and muds. “Thanks to the water supply scheme of Nala, that I have been able to wash myself everyday trying to forget that horrible incident that shattered my efforts and dreams.” Said she with hint of smile at her face. 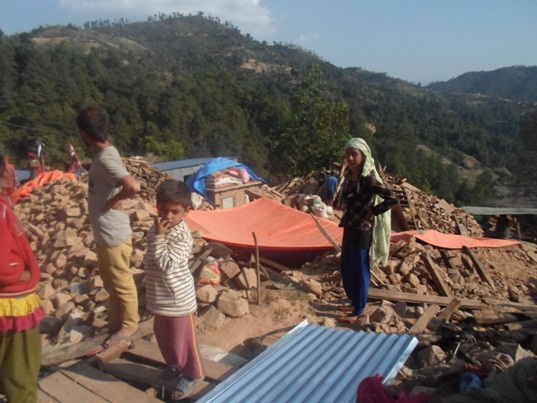 “Finally, after a week we have been able to take out clothes and foods from house else we were having trouble” said Ganesh Maya. Ganesh maya is not only one who is sacred to see or go to her house as there are number of other peoples who are still at shock. However what might be the state of people they are still conscious about their personal hygiene and safe water. ‘We are fortunate that we have been supplied with water day and night so that we can keep ourselves clean and stay away from epidemics” said Ganesh maya. 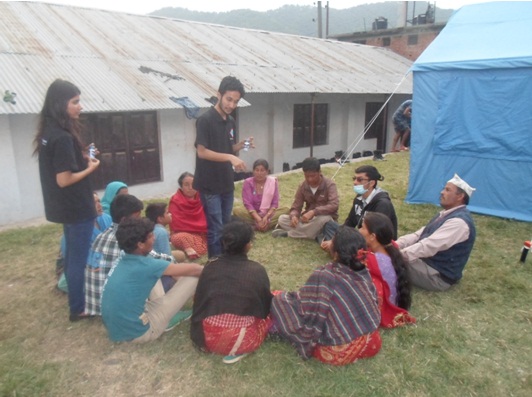 As one of the pioneer organisations working in the urban poor community for last 13 years, CIUD had decided to go in a rush movement for immediate action and relief supports for the victims of Nala VDC. With the partnership of Water Aid Nepal we have very immediately started the relief supports program for the victims of earthquake. In the first step of relief supports program, we had distributed relief materials such as 50 pieces of Tarpouline sheets, 15 water tanks of 500 liter. Similarly, food items (5 packets noodle, 5 kg of beaten rice, dry food) per household for 300 families were distributed to earthquake victim at Nala VDC. 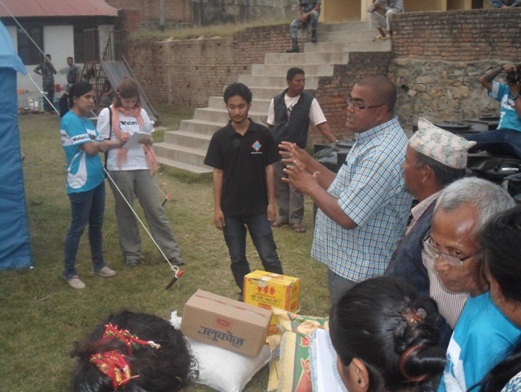 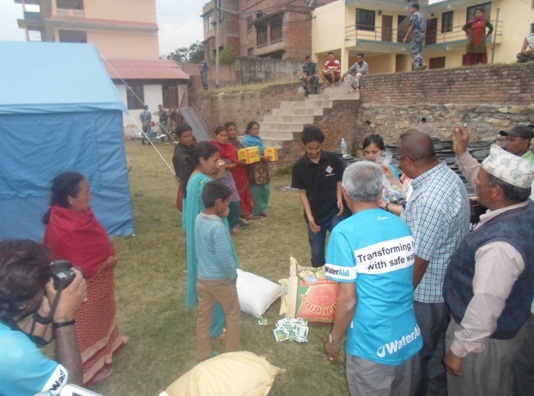 Since after the destructive quake chances of contamination of water and diseases related with it has increased, similarly conscience among the people has also increased. Hygiene kit which includes (soap, detergents, tooth paste, tooth brush, nail cutter, sanitary pad, torch light), has been distributed to 110 Households. Likewise 48 sets of Bucket and jugs, 3000 pieces of masks, 450 pouches of ORS, 360 litre Phenyl has been distributed so far. 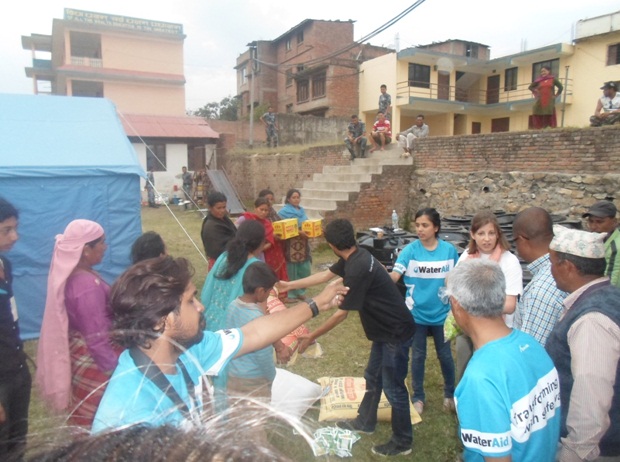 In the relief distribution program, representatives from Red Cross society Nala, Water Aid Nepal (WAN) and Centre for Integrated Urban Development (CIUD) members were all actively involved in the distribution program. Relief materials were distributed in coordination with DDC, DWSO, VDC and local political bodies. In the entire first phase of relief materials distribution program, all together 300 families of earthquake victims will be directed benefitted from this program. Community people were seemed more confident after the relief materials support.  After giving them the confidence, the process of rebuilding needs to be initiated with involvement of the locals and support from the government. But the affected people need further support for relief presently and in future for rehab and reconstruction. CIUD is very glad to be a part of this process.