What are the costs of urbanization? There are many of them, but down the list, one of the major concerns is ‘preservation of natural resource systems’ as landscapes change into urban centers. Nepal has urbanization rate of 4.8% which is the highest in the region. However, urban planning and management are quite far behind. This case entails role of local stakeholders in preserving a local pond. Nhu Pukhu is an ancient pond ofthe city of Patan. ‘Nhu’ representing short form of word ‘Nhugu’ in local Newari language meaning ‘new’ and is also referred to as ‘Rani Pukhu’, a queen’s pond.

What are the costs of urbanization? There are many of them, but down the list, one of the major concerns is ‘preservation of natural resource systems’ as landscapes change into urban centers. Nepal has urbanization rate of 4.8% which is the highest in the region. However, urban planning and management are quite far behind. This case entails role of local stakeholders in preserving a local pond. Nhu Pukhu is an ancient pond ofthe city of Patan. ‘Nhu’ representing short form of word ‘Nhugu’ in local Newari language meaning ‘new’ and is also referred to as ‘Rani Pukhu’, a queen’s pond. Nhugu Pukhu was built in the recharge zone of the city – Lagankhel. Location of the pond is strategic in the geological formation of Patan with more than 3 m deep gravel deposition which lies very close to the ground surface. It is believed that this traditional pond supplied water to two important aquifers namely Nayekhyo and Naricha of the city which feed numerous wells and stone spouts inside the core of the city. There weretwo canal systems and one is from Tika Bhairab(Rajkulo) built during middle age to fill this pond year around. The pond was present as a live pond around 20 years back, but then gradually it went on drying as a result of land encroachment and blockage of the channels that feed water into the pond. Around 8 years back, the pond dried-up completely and was even very close to turning into a dumping site when the water in the pond had dried up completely. The local residents soon realized that the pond had to be taken care of and should be preserved for its historic significance. A committee that took upon the task of restoring the pond was formed under Ward Number 5 Samrachyan, Sudhar tatha Bikash Sammittee, a local management team, and they started their mission by cleaning the pond with support from LSMC.The locals’ awareness and pro-activeness was the main strength in this case. As a catalyst to it, in their need of technical know-how, technicians of Centre for Integrated Urban Development (CIUD) visited the site and developed a technical design and a master plan for recharging of the pond, restoration of its state and management of the pond in longer terms. With this start, Lalitpur Sub-Metropolitan City office and development partners like UN-HABITAT have been supporting the locals and CIUD has been continuously working with the community for betterment of the pond.The committee has also made provisions to divert the rainwater from the surrounding streets to the pond. Rainwater diversion system has been installed with filter chambers, and cleanliness of the pond has been maintained with gardening efforts by the locals. Rainwater from the newly constructed Karmachari Sanchaya Kosh Bhawan, a huge building just next to the periphery of the pond, is being collected into the pond. The locals held a series of discussions with the government line agencies and contractors not only to have provisions of diversion of rainwater from the building into the pond, but also had an underground canal restored (the canal was previously built to feed water from the pond through underground networks into the stone spouts that lie towards downward elevation of the city). So – what was the result of the all struggle community went through and all the technical support development partners provided? There are some good ones.The first one being the significant increase in water level of Nhu Pukhu. It reaches up to 9 feet during the monsoons, and stays steady at 4 feet during dry months. 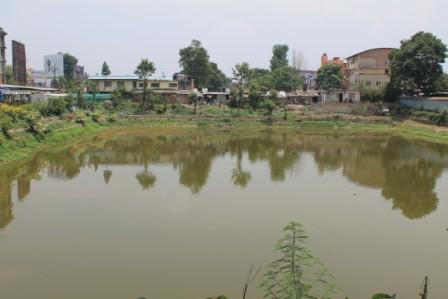 Underground water table has increased after the restoration of the pond and is reflected through increased levels of water in wells that are close to the pond. The water supply in the area from the municipal system is unreliable and local residents are directly benefitting from water in their wells. Fishery in the pond is an another added-value effect. It is also an example of good water quality of the pond. The management team has additional income from the fishery. Water quality tests have been conducted and the water is fairly clean for aquatic purpose and recharging concerns. The committee has also hired a caretaker for looking after the cleanliness of the pond and for handling the fishery works. Gardening has been conducted to grow seasonal vegetables and flowers – which also provide some income for the pond management. People who live around the pond area feel that theaesthetic value has been added and also said that the presence of pond has made the local environment fresh and cooler. ‘Now with the awareness on need of restoration of ponds and recharge of rainwater, there are many students and visitors coming to the pond and learning from here’ says Mr. Bikash Man Shrestha, vice-chairperson of the committee. What next? ….. The committee has along term plan to further manage the pond. And we believe this should be well implemented, and timely. Beyond this, the efforts of the community should be presented as a source of inspiration to other communities where ponds are still left to dry-up. CIUD will keep working with the local communities to support the team further and spread the message from its success to other communities. A historic pond went dry, urbanization over-shadowed the priority of pond management, and now the locals have it restored back to full life of the pond. This is a success for the whole city. Strong willingness from the communities and timely technical support for such communities is a vital combination that this case has exhibited. Government’s priority for these kinds of interventions will always be expected, however the wait should be over once local communities decide to take a lead.