Gamcha is a small cluster of ultra-poor communities at Kirtipur, situated about 10 km south-west from Kathmandu. The place had been hard-hit by the earthquakes of 25th and 26th April 2015.

Gamcha is a small cluster of ultra-poor communities at Kirtipur, situated about 10 km south-west from Kathmandu. The place had been hard-hit by the earthquakes of 25th and 26th April 2015. In total, over thirty-five households had been fully damaged in the core settlement of Gamcha (Lower Gamcha and Upper Gamcha) out of around 60 households in the core settlement. Ms Chandra Maharjan, whose house was totally devastated by the disaster, became one of the beneficiaries of the temporary shelters supported by CIUD under UN-Habitat’s immediate shelter program. 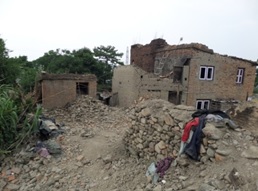 Like other children Rohan Maharjan, a fourteen-years-old sixth graded student was also affected as he did not have the environment and space to resume his. Soon after CIUD helped them build a temporary shelter, he says, “Now I am able to do my studies more comfortably than before. Previously our stay was very congested, but now it is cooler with wider space. 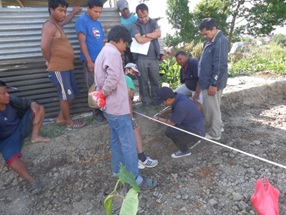 Ms Chandra’s leg was fractured in the disaster and had had a steel plate fixed in the foot. As her family’s economic status was very low, she used to do labor works to support her family.. Referring to the shelter support provided to her, she says “Everything is better than earlier. Earlier after the earthquake destroyed our house, we lived in a very small space covered with tarpaulins and old CGI sheets. But with support from CIUD, we built a new one with zinc sheets, few bamboos and old CGIs that we already had. Now our new shelter is larger, convenient and safer. We have fixed a door too, so we can lock the house and go out to the work. My little daughter of 18 months has a big space to play inside and my son is happy to do his studies more comfortably. One evening, when we were living in our previous place, my boy was doing his homework and it started to rain. All his exercise books and school books got wet. He felt very sad. With the new zinc sheets, now the roof is not leaking.” 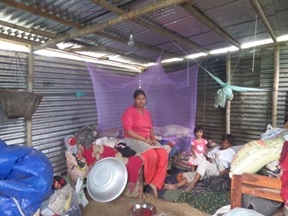 She thanked CIUD and UN Habitat for the generous support. She also recalls the water and sanitation related support provided by CIUD in her community. And we urge; we continue to work with and work for these needy people.